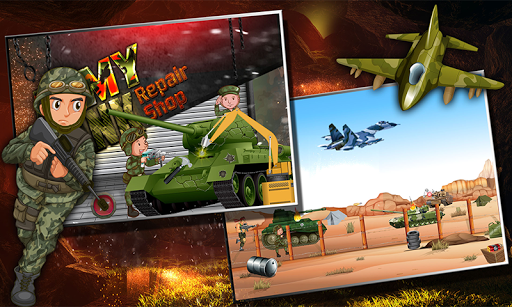 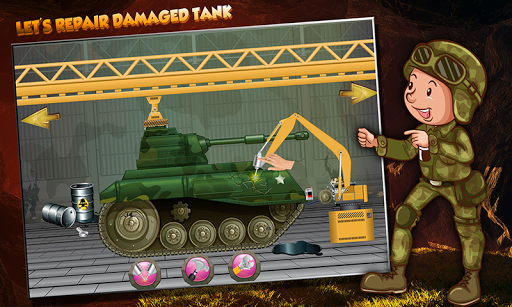 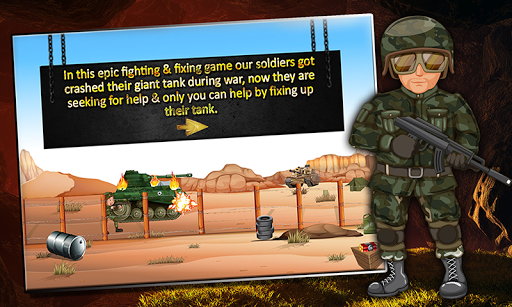 Hey! want to play like real soldiers? here you’re welcome to our ‘Army Tank repair’ game. Rival armed forces attacked and destroyed our fighting jeeps, jets, helicopters, weapons, bombs and other army resources. Our warriors need your help so keep your repairing gadgets ready and start repairing rusty, damaged and messy tanks. We can’t win this battle without your help, so guys hurry up and make the old broken tanks like brand new tanks so our soldiers can defeat rivalry teams.

Our soldiers are getting injured and there is no doctor or hospital near to cure their wounds and perform surgery. Soldiers can’t protect and win this battle without operational tanks and weapons. See the war story scene and select multiple fighting tanks to repair in your makeover garage, tank repairing games has never been so interesting and exciting so be the best repairman in town and utilize your washing, repairing and fixing skills.

Boys and girls you need to washout the dirtiest and messy tank with soap, sponge and water shower, remove stains with stain remover and then fix the damages and bullet holes with welding machine. Use hammer to get in shape dented parts of tank and replace the defected body parts like Tyre, rims and machine gun. Tight up the loose nuts and bolts with wrench. After cleanup and repair now fix the engine issue and change air filter plus check its fuel level and up size the tank with fuel and petrol. Little builders now design and assemble all body parts and again check overall maintenance and make sure not a single problem left to fix up.

So Players! Now get your hands on this crazy tank adventure ‘Army tank repair’ game and spend plenty of hours to give the best tank makeover plus enjoy the best and realistic battle story scene with interesting game play and musical effects.