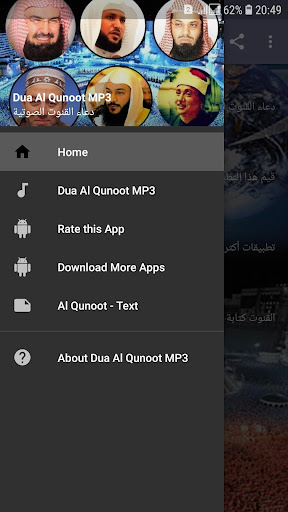 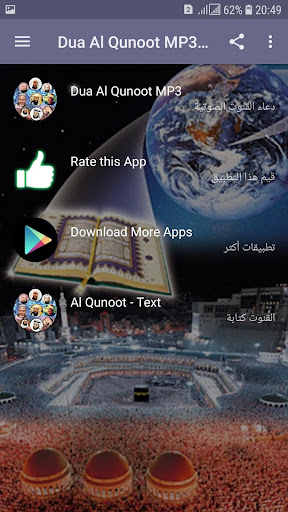 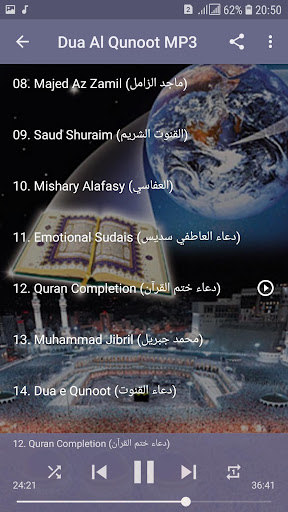 Beautiful, amazing and very emotional Dua qunoot collection just for you. If you want to learn the dua qunut to make dua during Ramadan or tahajjud or just in your normal prayers then this is the app for you. All dua qunoot offline are mp3 and works without internet connection. al qunut audio offline

In this App you’ll find the following Dua e Qunoot :

“Qunut” (Arabic: القنوت‎; also transliterated Qunoot) literally means “being obedient” or “the act of standing” in Classical Arabic. The word Dua is Arabic for supplication, so the longer phrase Dua Qunut is sometimes used.

Al-Qunoot has many linguistic meanings, such as humility, obedience and devotion. However, it is more understood to be a special du’a which is recited during the prayer. Du’aa al-Qunoot

Qunoot, according to the definition of the fuqaha’, “is the name of a du’aa’ (supplication) offered during prayer at a specific point while standing.” It is prescribed in Witr prayer after the rukoo’ (bowing), according to the more correct of the two scholarly opinions.

If a calamity (naazilah) befalls the Muslims, it is prescribed to say Du’aa’ al- Qunoot after standing up from rukoo’ in the last rak’ah of each of the five daily obligatory prayers, until Allaah relieves the Muslims of that calamity.

If you enjoy my app, please don’t keep quiet. Rate it in the store and leave your review. Let me know which of the qunoots you love the most. Also share this app with other Muslims.

Thank you for checking this dua e qunoot with audio offline